Bosnia: ‘They didn’t give a damn’. First footage of Croatian police brutality [ENG]

Migrants who allegedly suffer savage beatings by state officials call it ‘the game’. But as shocking evidence suggests, attempting to cross the Bosnia-Croatia border is far from mere sport

As screams ring out through the cold night air, Sami, hidden behind bushes, begins to film what he can.

“The Croatian police are torturing them. They are breaking people’s bones,’’ Sami whispers into his mobile phone, as the dull thumps of truncheons are heard.

Then silence. Minutes go by before Hamdi, Mohammed and Abdoul emerge from the woods, faces bruised from the alleged beating, mouths and noses bloody, their ribs broken.

Asylum seekers from Algeria, Syria and Pakistan, they had been captured by the Croatian police attempting to cross the Bosnia-Croatia border into the EU, and brutally beaten before being sent back.

Sami, 17, from Kobane, gave the Guardian his footage, which appears to provide compelling evidence of the physical abuses, supposedly perpetrated by Croatian police, of which migrants in the Bosnian cities of Bihac and Velika Kladusa have been complaining.

The EU border agency, Frontex, announced on Wednesday that this year is likely to produce the lowest number of unauthorised migrants arriving into Europe in five years.

Frontex said that approximately 118,900 irregular border crossings were recorded in the first 10 months of 2018, roughly 31% lower than the same period in 2017.

Despite this steady decline in numbers, many states remain embroiled in political disputes that fuel anti-migrant sentiment across Europe.

Frontex also noted that, while entries are declining, the number of people reaching Europe across the western Mediterranean, mostly through Spain from Morocco, continues to rise. Nearly 9,400 people crossed in October, more than double the number for the same month last year.

But the brutality of what is happening on Europe’s borders is not documented. Every night, migrants try to cross into Croatia. And, according to dozens of accounts received by the Guardian and charities, many end up in the hands of police, who beat them back to Bosnia.

No Name Kitchen (NNK), an organisation consisting of volunteers from several countries that distributes food to asylum seekers in Serbia, Bosnia and Italy, registers 50-100 people a week who have been pushed back by the Croatian authorities. Roughly 70% of them claim to have been beaten.

“In the last months our team in Bosnia and Herzegovina has regularly treated patients – sometimes even women and small children – with wounds allegedly inflicted by state authorities when attempting to cross into Croatia and Slovenia, where, according to their testimonies, their claims for asylum and protection are regularly ignored,” says Julian Koeberer, humanitarian affairs officer in the northern Balkans for Médecins Sans Frontières (MSF).

Since the turn of the year, the Bosnian authorities have registered the entry of about 21,000 people, coming from Pakistan, Afghanistan, Iran or Syria. Of these, an estimated 5,000 remain in the country.

Of 50 people to whom the Guardian spoke, mostly from Pakistan, 35 said they had been attacked by Croatian police. The majority of them arrived in Bosnia through Turkey, hoping to reach Slovenia, a Schengen country, before heading to Italy, Austria or Germany.

Adeel, 27, from Pakistan, claims he had his ankle broken with a truncheon. ‘‘Where are the human rights?” he asks.

Anees, 43, also from Pakistan, says he begged the police not to beat him after he was stopped in the woods on the border with Velika Kladusa. ‘‘I have a heart disease, I told them to stop because they could have killed me,’’ explains Anees, whose medical conditions are detailed in a clinical file.

On 9 June 2018, he had heart surgery at the Zdravstveni centre hospital in the Serbian city of Uzice. After the operation, he continued his journey. He struggles to breathe as he tells his story: ‘‘I told him I was sick, I showed them the clinical file. They did not give a damn. They started beating me and sent us back to Bosnia. But it does not matter. Tomorrow I will try the game again.’’

That’s what migrants call it: ‘the game”. But there is nothing fun about it. They set off in groups: 70 or 80 people, or sometimes as few as five to 10. Police, armed with truncheons, pistols and night vision goggles, patrol Europe’s longest border between Bosnia and Croatia. According to accounts provided by more than 10 migrants, some officers wear paramilitary uniforms with a badge depicting a sword upraised by two lightning bolts. This is the badge of Croatian special police.

“They stop us and, before beating us, they frisk us”, says Hamdi, 35, An Algerian language teacher. “If they find money, they steal it. If they find mobile phones, they destroy them to avoid being filmed or simply to stop us from contacting our friends. And then they beat us, four or five against one. They throw us to the ground, kick us, and beat us with their truncheons. Sometimes their dogs attack us. To them, we probably don’t seem much different from their dogs.”

Hamdi is one of three men traveling with Sami. The screams in the video are his. His face is covered in blood when he reaches his friends. His nose is broken, his lips swollen.

“After repeatedly being pushed back or forced to return to Bosnia on their own, asylum seekers find themselves in unsanitary, improvised settlements such as open fields and squats while formal government camps are full,” says Koeberer.

“Those sites still offer alarmingly inadequate conditions due to only slow improvement in provision of winter shelter (food, hygiene, legal status and medical care), and these inhumane living conditions have severe impact on people’s physical and mental health. In winter, the lives of those who are forced to remain outside will seriously be at risk.’’

At the camp in Velika Kladusa, where Hamdi lives, dozens of people sit in the mud and on piles of rubbish, awaiting the arrival of the doctors. On man has a cast on his arm and leg, the result, he says, of a police beating. Others show black eyes, bruises on their backs and legs, lumps and wounds on their heads, split lips, and scars on their legs.

‘‘There have been cases in which migrants claimed to have been stripped and forced to walk barefoot with temperatures below freezing,” said Stephane Moissaing, MSF’s head of mission in Serbia. “Cases where asylum seekers have told how police would beat children in front of their parents. From the information we have, up until now, it is a systematic and planned violence.”

Karolina Augustova, an NKK volunteer, says violence has increased since October protests in which hundreds of asylum seekers marched from the north-western town of Velika Kladusa towards Croatia to object against pushbacks that violate the rights of people to seek asylum in Europe.

The Bosnian police appear to be aware of the assaults. A Bosnian police agent guarding the camp in Velika Kladusa, who prefers to remain anonymous, points out a bruise on a boy’s leg. “You see this bruise?” he says. “It was the Croatian police. The Bosnian police know, but there is no clear and compelling evidence, just the accounts of the refugees and their wounds.”

The majority of Bosnians live in peace with migrants and view them as refugees. The scars from the war that ravaged this area in the early 1990s are everywhere, in the abandoned homes riddled with machine gun fire and in the collective memory of Bosnians. People from Bihac and Velika Kladusa know what it means to flee from war. The minarets of the numerous mosques along the border are a reminder that Bosnia is the closest Muslim community in Europe.

“I feel sorry for these people,’’ says the policeman on guard. ‘‘They remind me of the Bosnians when the war devastated our country.’’

MSF, NNK and a number of other organisations have repeatedly reported and denounced violence perpetrated by the security forces in the Balkans, but Croatian police deny all the allegations. 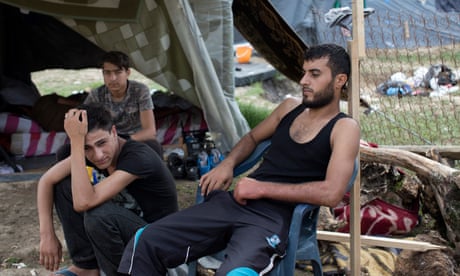 Refugees crossing from Bosnia ‘beaten and robbed by Croatian police’

The Guardian has contacted the Croatian interior minister, the police and the Croatian government for comment, but has received no response.

Abdul, 33, recently arrived in Velika Klaudusa after a journey that lasted over a year. He comes from Myanmar and has lost everything: his wife and children were killed, and he has no news of his father, mother and sisters. Abdul has heard about the violence and is worried. The migrants around him, with bandaged legs and noses and bleeding mouths, cause fear.

“I lost everything, yes, it’s true,” he says. “But I have to get to Europe, one way or another. To make sense of what I lost. I owe it to my dead children. To my wife who was killed. To those who have not had the good fortune to have arrived here safe and sound.”