Thousands of protesters occupied bridges across the Thames over extinction crisis in huge act of peaceful civil disobedience.
Eighty-five people have been arrested as thousands of demonstrators occupied five bridges in central London to voice their concern over the looming climate crisis. 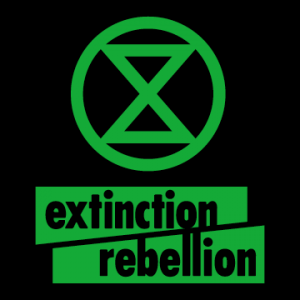 Protesters, including families and pensioners, began massing on five of London’s main bridges from 10am on Saturday. An hour later, all the crossings had been blocked in one of the biggest acts of peaceful civil disobedience in the UK in decades. Some people locked themselves together, while others linked arms and sang songs. By 2pm the blockade of Southwark Bridge had been abandoned and protesters moved from there to Blackfriars Bridge, where organisers said they were soon to move west towards Westminster Bridge.

Demonstrators occupied Southwark, Blackfriars, Waterloo, Westminster and Lambeth bridges. The Metropolitan police said all the bridges had since reopened and that most of the arrests had been for obstruction under the Highways Act. Afterwards, demonstrators gathered in Parliament Square to hear speeches.

The day was due to end with an interfaith ceremony outside Westminster Abbey. The move is part of a campaign of mass civil disobedience organised by a new group, Extinction Rebellion, which wants to force governments to treat the threats of climate breakdown and extinction as a crisis.
“The ‘social contract’ has been broken … [and] it is therefore not only our right but our moral duty to bypass the government’s inaction and flagrant dereliction of duty and to rebel to defend life itself,” said Gail Bradbrook, one of the organisers. 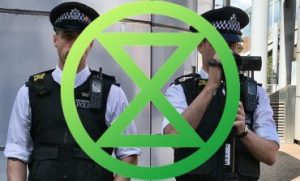 In the past two weeks more than 60 people have been arrested for taking part in acts of civil disobedience organised by Extinction Rebellion ranging from gluing themselves to government buildings to blocking major roads in the capital.
However, those disruptions were eclipsed on Saturday, when organisers say 6,000 people took part in protests.
Extinction Rebellion, which cites the civil rights movement, suffragettes and Mahatma Gandhi as inspirations, said smaller events took place in other UK cities as well as overseas on Saturday.
Organisers say they are planning to escalate the campaigns from Wednesday, when small teams of activists will “swarm” around central London blocking roads and bridges, bringing widespread disruption to the capital.
“Given the scale of the ecological crisis we are facing this is the appropriate scale of expansion,” said Bradbrook. “Occupying the streets to bring about change as our ancestors have done before us. Only this kind of large-scale economic disruption can rapidly bring the government to the table to discuss our demands. We are prepared to risk it all for our futures.”

The group is calling on the government to reduce carbon emissions to zero by 2025 and establish a “citizens assembly” to devise an emergency plan of action similar to that seen during the second world war.
On top of the specific demands, organisers say they hope the campaign of “respectful disruption” will change the debate around climate breakdown and signal to those in power that the present course of action will lead to disaster.
The group, which was established only a couple of months ago, has raised around £50k in small-scale donations in the past weeks.
It now has offices in central London and over the past few months has been holding meetings across the country, outlining the scale of the climate crisis and urging people to get involved in direct action this weekend.
The civil disobedience comes amid growing evidence of looming climate breakdown and follows warnings from the UN that there are only 12 years left to prevent global ecological disaster.